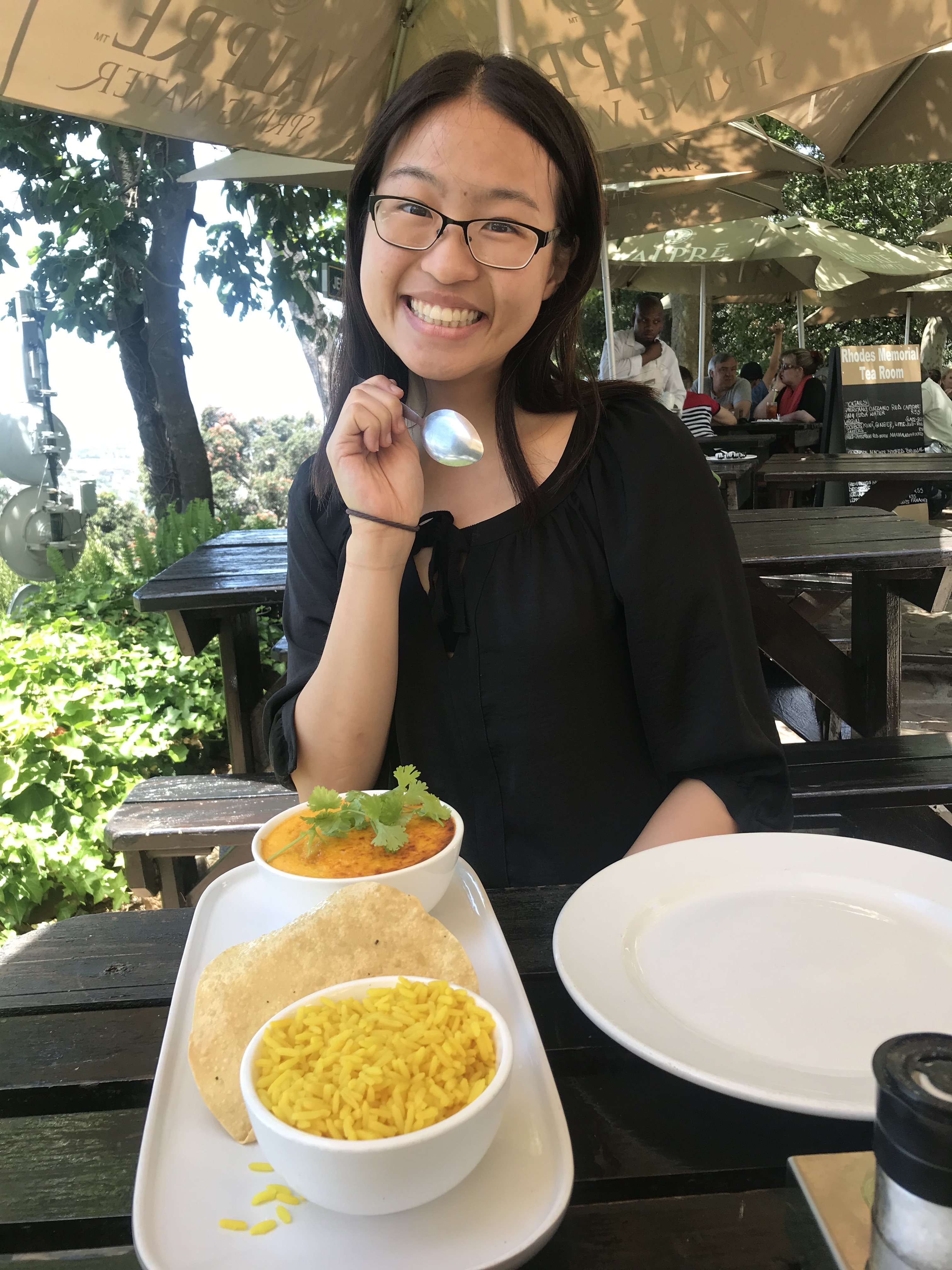 I am the sort of person who always orders things I've never tried before, purely for the experience.

It's something of a high-risk, high-reward strategy. Usually, after consulting online reviews and asking for recommendations, I discover something novel and delicious. Occasionally there are the misses (I tried cereal-flavored ice cream once. It was terrible).

I spent much of this Winter Break away on the road--with my family to Cozumel and Progreso, Mexico, and with my school debate team to Cape Town, South Africa. Of course, international travel means a rare opportunity for the taste buds, and I relished the opportunity with gusto.

Here, I'll be highlighting my six favorite foods from the trip, and I'll also talk about them in 3 categories, on a scale of 1-10:

1. Taste. Obviously the most important thing, but merely a subjective judgement of how much I enjoyed the flavors of the dish.

2. Presentation. A-la Food Network (which I love to watch), it's critical that a food looks as good as it tastes. Plus, do it for the 'gram?

3. Uniqueness. Does this food highlight local flavors? Is it a combination of things that I've never tried before? Does it give a fresh take on a classic menu item? In general, this is the category where I ask, 'why will I remember this meal, months after it's over?'

6. Peach Soup from the Carnival Triumph 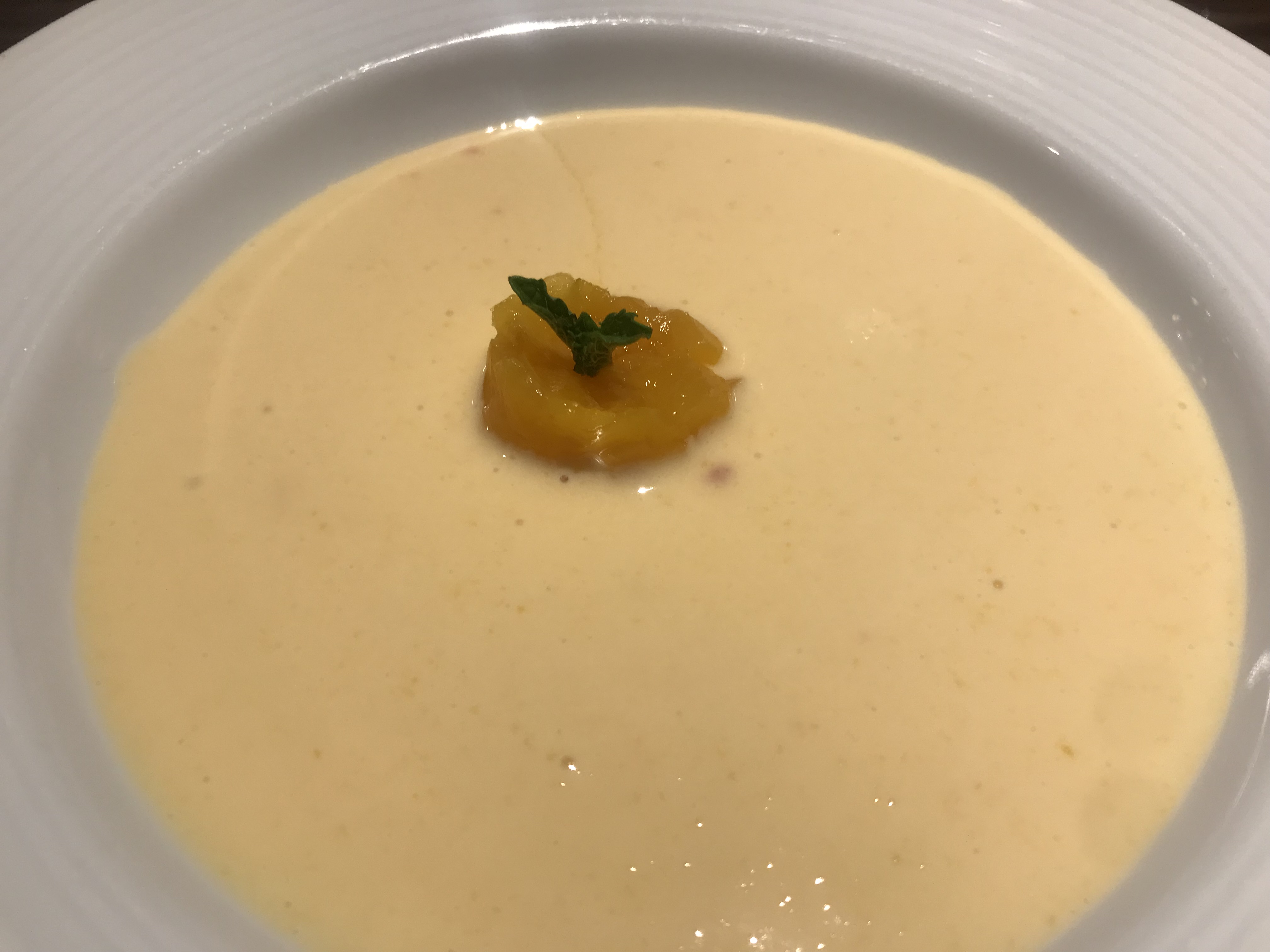 In general, the food on the Carnival Triumph (our cruise ship for the Mexico trip) was decent, but few of the meals were especially spectacular. They were, overall, standard, solid meals. My favorite from the trip, however, was the peach soup. The soup was served chilled, and the presentation was incredibly pleasant: the waiter poured it into the bowl in front of you with one quick swirl.

I loved its faint pink color, and its mild sweetness captured the taste of peaches well. I also found the idea of turning peaches into a chilled soup somewhat novel, since I had not previously tried a peach soup. Though I wouldn't book a cruise solely for the purpose of trying the peach soup, this is a recipe that I'd like to recreate on my own someday.

5. Bobotie from the Rhodes Memorial Restaurant

Bobotie is a classic South African dish, and I had the pleasure of trying it while visiting the country. The dish consists of meat (sort of a chili-like consistency) topped with a creamy egg custard-like covering, served in a bowl. It was meant to be eaten with a bowl of rice, served on the side. This particular bobotie was ostrich meat, which I found tasted quite similar to beef.

I loved the color scheme of this dish. The yellow custard contrasted so beautifully with the golden brown of the meat, and the taste complemented umami with delicious spices. It also helped that we were seated outdoors, high up enough in the mountains that I could view the sea. Taking an afternoon to hike up to the cafe and try out the bobotie definitely made the day worthwhile. 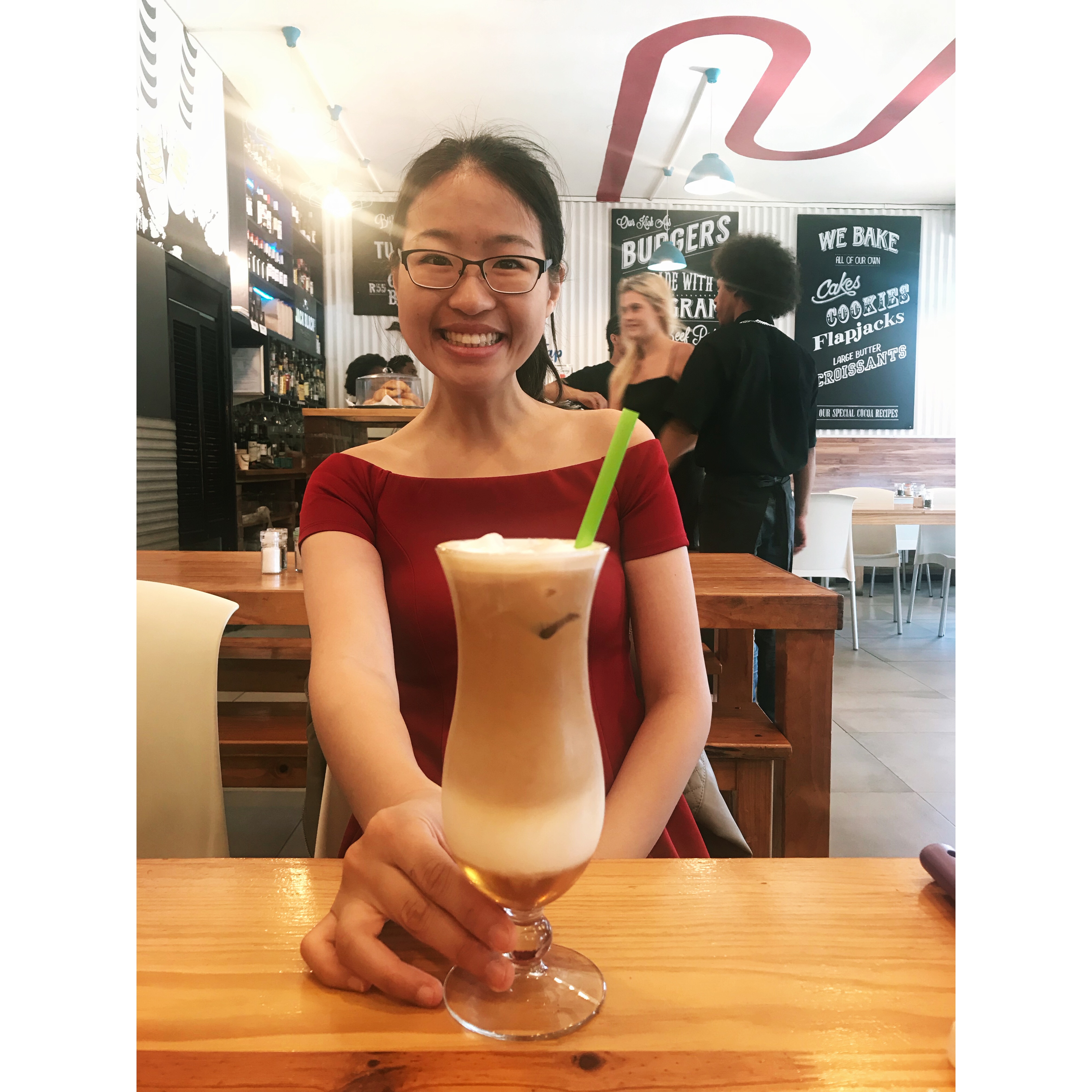 One of my debate teammates discovered a lovely little cafe about five minutes from the dormitories where we were staying. Cocoa served delicious drinks--the hazlenut latte came with beautiful layers (syrup at the bottom, coffee in the middle, milk cream at the top), which marbled as I sipped the drink. The latte's sweetness was perfect and not too overpowering. As soon as I had ordered it, someone else came and asked me for the name of the drink so that they could order it themselves--only validating the latte's place on this list. 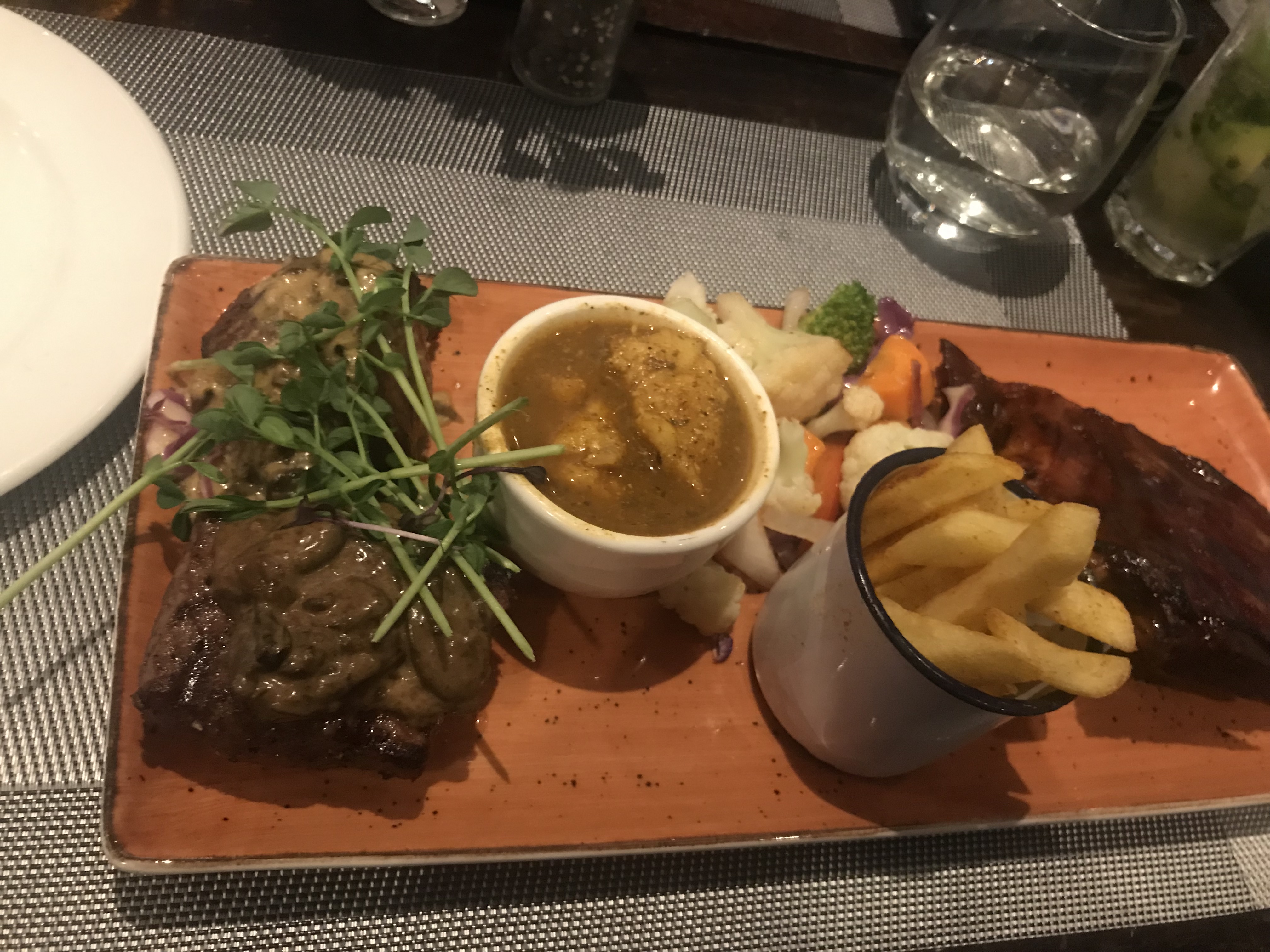 On New Year's Eve, a few friends and I had been trying to join a group of other friends when we learned that the latter group was at a 21+ restaurant. Since I'm sadly still 20, we decided to wander around the vicinity to find an alternative. Thus, we came upon Arnolds. I asked the waiter for a recommendation, and he showed me the Game Meat Platter--a combination of several 'game meats' (i.e., animals one would find on a safari), served on a tasting plate.

The platter included emu, alligator, kudu loin, and warthog ribs. All were cooked perfectly, and the ribs in particular were delicious (though a bit difficult to cut into). Some magical combination of the texture (quite lean), the seasoning, the sauce, and the char made for a delightful dish.

The emu and the kudu were both red meats, and--to be entirely honest--I both had difficulty telling them apart from each other and telling them apart form a tender beef steak. The alligator meat, which was a white meat, became a point of contention among those who ordered the platter. Some argued that it tasted like chicken; I felt that it tasted more similar to a melt-in-your-mouth sort of fish fillet, but that it did have the chewy texture of chicken. Regardless, we all felt that the platter was delectable.

If you're in Cape Town, South Africa, the game meat platter is worth a try. 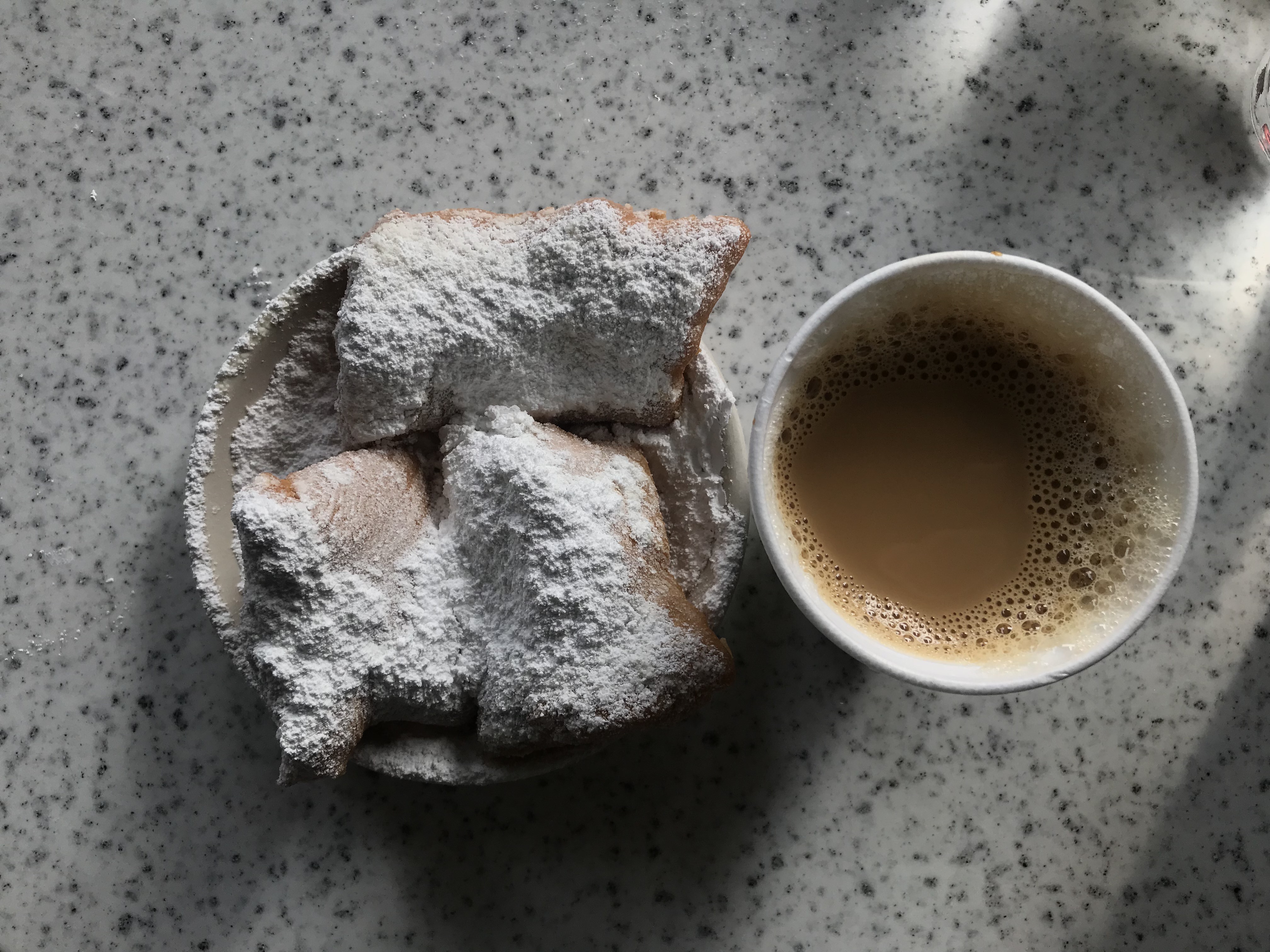 My family and I arrived at New Orleans, our port of call for the Mexico cruise, one day early. Given that New Orleans is famous for its food--and French cuisine in particular!--we headed to breakfast at its famous French-style cafe. The cafe had an incredibly simple menu: it offers only a single coffee option (cafe au lait) in addition to the noted beignets. However, it's clear that it has specialized incredbily well. Though the beignets exploded my clothing with powdered sugar, they were divine. They were soft, light, and airy; the additional powdered sugar on the surface added an extra touch of sweetness that I found delightful. Combined with the slightly bitter taste of coffee (which was good, but not something I found incredibly special), they made for an incredible breakfast. 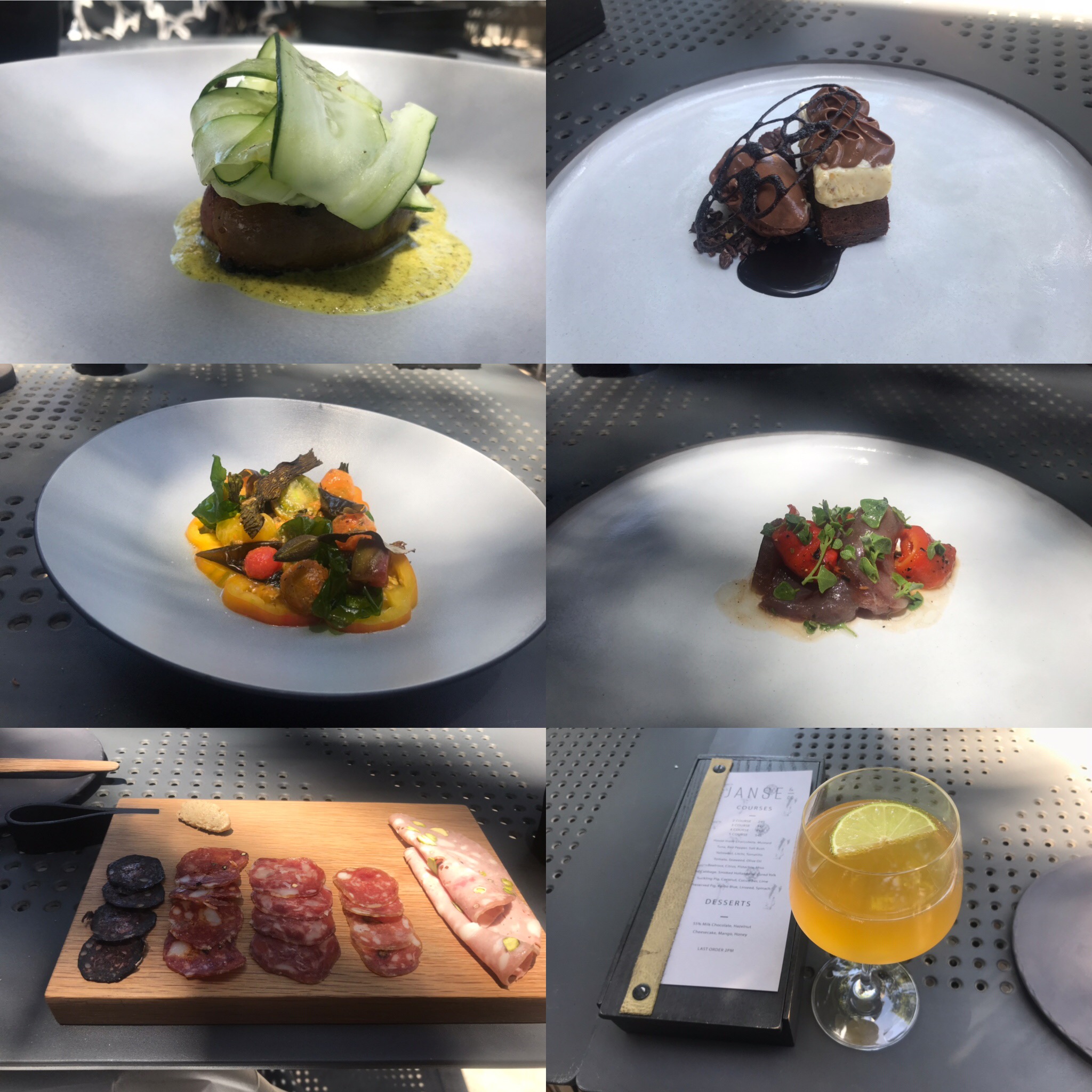 The morning I left South Africa, a few teammates and I had the opportunity to land a reservation at Janse, a high-end restaurant on Kloof Street that serves food from a multi-course tasting menu. The minimum number of courses one could choose from the menu was two; the maximum, five.

Since the price of the five-course meal was only about $36 USD, I chose the five--'go big or go home,' as they say. The experience was entirely worthwhile.

The courses I chose were the following:

I also took up the waiter's recommendation of a drink--which was essentially the house's take on a citrus-y gin and tonic. It was good, but I'm truly no expert on drinks, so I don't have too much to comment.

Our waiter personally presented each course to us, explaining the creative process behind the dishes and describing each ingredient with precise detail. Each course was served with a substantial amount of time in between, and the portion sizes were relatively small, so I never felt particularly stuffed.

Each course was packed with flavor, and often delivered pleasant surprises. The individual slices of charcuterie each gave a distinct flavor. One slice that I recall most clearly was a smoky mutton. In the tomato dish, I found the seaweed unexpectedly crunch and tasty. My favorite of the courses was the raw tuna, which was seasoned perfectly and paired well with the cooked red bell pepper. The final entree course, suckling pig, was incredibly tender. Its umami contrasted sharply but altogether delightfully against the coolness of the cucumber and lime. Lastly, dessert was an amazing chocolate cake, paired with cream and chocolate curls. I tried to place a bit of the cream, cake, hazelnuts, and chocolate curls all on my spoon at once; the result was an explosion of sweetness, but with quite a lovely texture.

This was, by far, my favorite meal of the break. A Cape Town must-visit!

My (dis)honorable mention is The Grand Daddy, a hotel restaurant in Cape Town. We had no choice but to eat at the Grand Daddy because it had been New Year's Day, and most other restaurants were closed. My primary complaint about this establishment is that the service was (perhaps due to holiday understaffing) woefully slow. In the time that we waited to get our food, one of my debate teammates went to a nearby KFC, came back, and polished off an order of fried chicken. The actual food, when it actually arrived--consisted of two very small pieces of toast, two eggs, a few pieces of bacon, and a spoonful of mushrooms. It would have taken all of 15 minutes to cook the meal, so given the hour that we waited, it was a bit of a disappointment. The plus? The place has a hilarious name.